What just happened with the CRM? 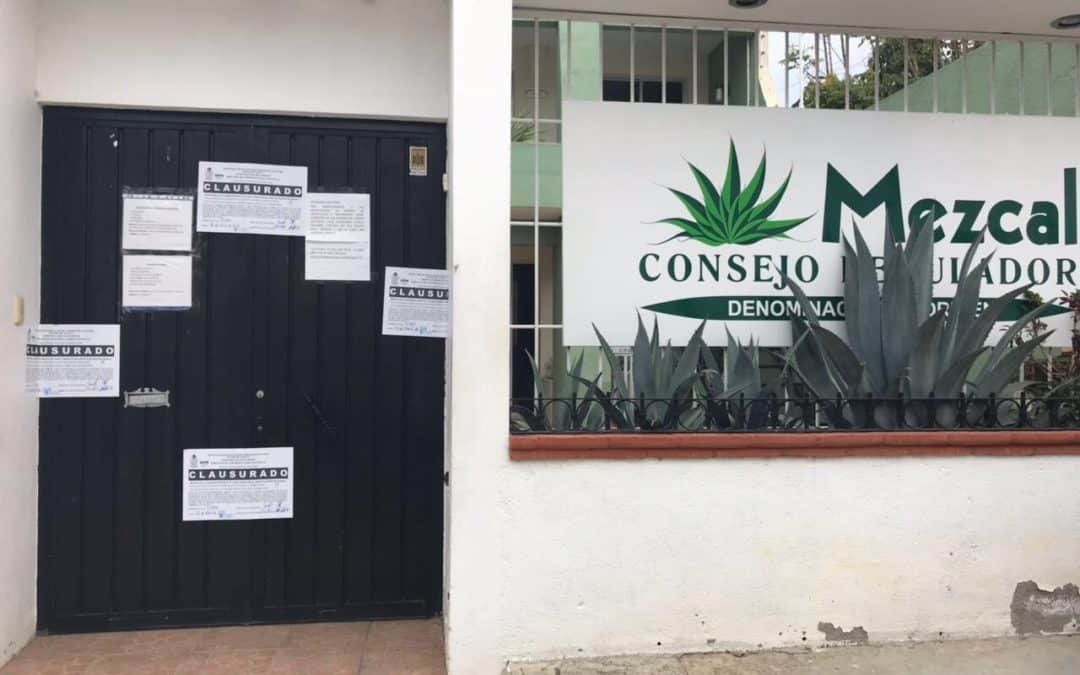 As you may have noticed there was a huge explosion on social media last week about the Consejo Regulador del Mezcal (CRM) in Oaxaca. The CRM makes the rules for mezcal so this was big news: The headquarters were locked and sealed, Hipocrates Nolasco Cancino the leader of the CRM chained himself to a gate, there were wild rumors about a takeover and then, on Tuesday morning, everything seemed to go back to normal.

So, what really happened?

To set the table for all of this NOM 70, a sweeping new regulation for the mezcal world, went into effect on April 24th. You can read more about what it does in our previous coverage here and here. And, then, this Saturday May 12th is the election for the CRM board. Various factions representing the main political parties in Mexico and major business interests have occupied that board for years and there has been quite an active discussion about who will take over with all sorts of lobbying, social media spamming, and rumor mongering.

So, here’s what happened. In the run up to the election both of the main factions, one led by Hipocrates Nolasco, the other by Ray Chagoya of Mezcal Casa Chagoya, engaged in a massive theatrical performance. The US has become intimately familiar with the more gauche types of political kabuki because of our current president, usually we’re a bit more toned down about these things because, well, we’re Americans. But Mexican political drama is far more symbolic and direct.

Both sides threw themselves into protests and power plays in the most public way possible using all the tools at their disposal and then suddenly called off the game. Why? Because they’re fighting for control of the CRM and we can only guess that this public passion play wasn’t having any public effect other than making mezcal look ridiculous. So, it was back to normal sub rasa electioneering. Officials remove the seals on the CRM offices

No one comes off looking well here. But it’s not black and white either, there is no simple good or bad guy, there are only the voices of the powerful fighting for more power. And the only voice that doesn’t seem to have a say right now is the voice of mezcal. Enter the proclamation. Over the weekend a group of very engaged mezcal people including David Suro from Siembra Azul and the Tequila Interchange Project, academics, and several producers have circulated a proclamation which you can read in English and Spanish urging that the election for the CRM board be delayed until after the Mexican national elections on July 1st so that, hopefully, the whole situation will be depoliticized and everyone can actually focus on mezcal, not the power politics around it.

Along the way the proclamation addresses pretty much every complaint about the CRM, its leadership, and the way the whole appellation for mezcal was defined. Here are the petition points and the subtext, italicized, for every point:

First. That the election of the Board of Directors of the CRM scheduled for this May 12th be postponed.

This is pretty obvious. The current leadership is good enough. Let’s cool things off a bit and see if we can hold a more transparent election and find someone who’s better.

Second.While conditions to call for a new election are created, the current leadership should stay in change for three more months, until the Presidential election on July 1st has passed.

Third. During this time we call for the submission of other interested groups. We believe interested groups must not be an active contributor or members of a political party, must not be affiliated with any brand(s) of mezcal, and cannot have any conflicts of interest such as owning a laboratory; and the immediate re-election of any of the members of the CRM´s current administration is prohibited.

Let’s de-politicize the CRM and remove conflicts of interest. Previously prominent brands have led the group so they risk appearing to advocate for their segment of the industry or their specific brand. The note about a laboratory refers to Hipocrates directly because his family controls the chemical laboratory that certifies mezcal which at the very least is a conflict of interest. And, by keeping previous administrators out it’s an attempt for a fresh start.

Let’s take control of mezcal’s destiny by getting a group of people who aren’t concerned with power or profit but for the fate of the entire industry and the cultural fabric that it represents.

Fifth.  A Board of Analysis should be convened and made up of bearers of know-how and techniques, as well as those who define themselves as producers, academics, and non commercial organizations, so that in addition to revising proposals suggested by the CRM, other voices are heard and an inclusive and sustainable path is proposed, with and for the cultures of maguey and mezcal.

Previously larger brands had louder voices. Let’s make sure that everyone in the mezcal world gets heard.

Sixth. It is desirable that academics, such as people committed to the culture of traditional mezcals, should be considered to be the best candidates to run the CRM.

We’re going whole hog in removing politics from the CRM by keeping politicians and business people out of the mix.

The following are a few points that we (the petitioners) consider important to bring to the table for
discussion:That it should be recognized that Mexico is a country of maguey and mezcal, and as a consequence, each state of the republic that has evidence of historic production of mezcal, should have a representative whether or not it is included in the D.O.

We all know that the appellation was designed on the model of tequila and doesn’t work. Let’s redesign it to reflect the actual world of mezcal as it exists in Mexico.

• That work be done so that mezcal is recognized as a Generic Denomination and create conditions to be able to create small Regional Denomination, from biocultural territories, that is, based on traditions, knowledge and techniques traceable by regions.

Let’s get really deep into the details and create specific appellations that reflect traditions like clay pot distillation in Santa Caterina Minas or raicilleros in Jalisco. Look at the wine world, they’ve done wonders for Champagne with this method, saved traditions, and built a global economic powerhouse.

• In this vein, help to create state offices, in this way combating the centralized setup of the CRM. And in the same way, there should be regional verification laboratories and regional verifiers.

The CRM hasn’t been paying enough attention to any states outside of Oaxaca and needs to become an advocate for producers throughout Mexico.

• That in all cases, there is transparency in budgets and expenses, and audits should be considered.

Don’t hide anything. Make it all public so that, at the best, all that gossip about pay offs is muted, at the worst, any real pay offs are eliminated or pushed underground.

• That Consultant Boards be created to take part in decision making so that the responsibility does not lie solely on the Board of Directors. These Consultant Boards should be formed similarly to the Autonomous Commission.

Again, let’s make sure more voices are heard and give them power.

• Figures that promote cronyism like the ambassador of mezcal should be avoided.

There is currently a single ambassador of mezcal. There is lots of gossip about what he actually does because there’s no definition of what he’s actually supposed to be doing nor any public accounting of that.

•That all the information that is generated by the CRM be publicly posted on the CRM´s website and that it be delivered in a physical format to the maguey and mezcal communities, where there is generally limited to no internet access.

No one knows much about what happens in the CRM because there’s no effective communications strategy and not a bias to make information publicly available.

•That the meetings be transmitted live and be available online for those interested that could not attend so that they are informed, and if this is the case, have an opportunity to participate virtually

See above, make it all public so that it’s all very clear what’s going on.

Should you support it?

We’re big supporters of most of these ideas, sure some of them are a bit targeted, but that only reflects the overwhelming frustration with the way mezcal has been managed. We’ve done presentations on many of these ideas, discussed them thoroughly, and know they work in other places. So, implementing them in the mezcal world is a no brainer. The idea of a cooling off period is fraught, an election in two months just allow more theatrical behavior and possibly even have the perverse effect of screwing more shit up. But given our current state, it’s worth a shot.

But most of all this is about agency. Lots of us complain about how mezcal is defined, regulated, and managed. This is another demonstration that we’ll use the tools that we have, sadly we only have our voices but the least we can do is make ourselves heard because we don’t want the alternative and we already share a common vision. It’s really about expressing it. So, sign it and let’s see if we can push for changes that keep mezcal clean and honest, the way it’s supposed to be.