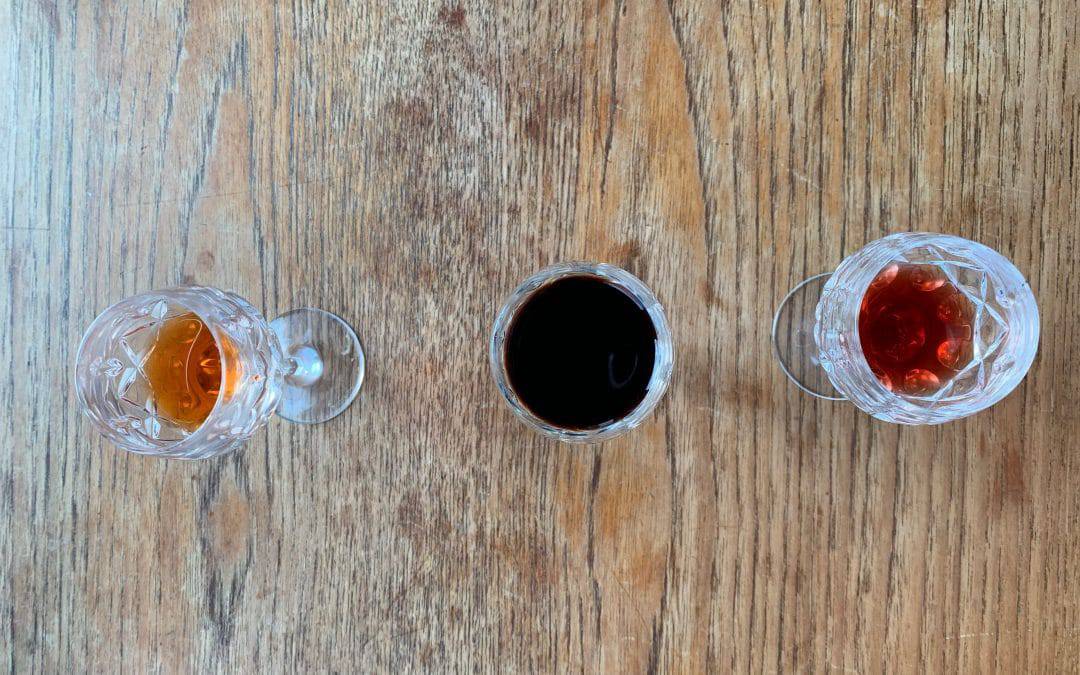 If you look closely at many a mezcal bar you’ll find three bottles of Mexican amari that really stand out from Royal Vallet in Mexico. The Fernet-Vallet, Amargo-Vallet, and Granada-Vallet are imported by Jacob Lustig of Haas Brothers which is also responsible for Don Amado and Mina Real mezcals among many other spirits. They have a great story that ties together old world Mexico with contemporary sensibilities.

All three of these bitters can stand on their own as sippers just as long as you like it bitter because there is barely a hint of sweetness to them. That’s a good thing for a number of reasons. It’s proof positive that they are actually bitters, designed and delivered as such. Vallet adds small amounts of sugar to the Fernet-Vallet and Granada-Vallet to balance out the flavors but I couldn’t taste it.

Of course straight bitters are an acquired taste so sipping them is definitely not for everyone – in my limited taste tests I’ve seen plenty of grimaces – fortunately cocktails are a natural home for them either as accents, add a dash of the Amargo to Manhattan in place of Angostura, or as a main ingredient, add Granada to your Negroni in place of Campari for a revelatory experience. We have more cocktail advice below.

The beautiful orange tinted color and equally striking label set this label apart whether in the bottle or the glass. It’s intensely herbal with a tangy orange peel highlight. It’s the perfect replacement for Campari, probably even better and closer to the original Campari because the Granada still uses cochineal, the insects that grow on cactus nopals, to create its distinctive red/orange tint.

The heart of darkness in color, it resembles a nocino in tint, but is lighter than a Fernet Branca in flavor – if there’s any sweetener here I can’t taste it – the body carries flavor not viscosity so you can sip it without it sticky to your lips. It’s full of all that herbaceousness that you need to wake you up your taste buds without blowing your socks off. I get a good strong whiff of rosemary in that distinctively Fernet nose.

The singing bitter, the Amargo is such a brightly tinted and flavored bitter that really lingers with characteristic cough syrup flavors redolent of licorice and rosemary.

A bit of history.

Fernet-Vallet and Amargo-Vallet date back to 1882. Henri Vallet, a French entrepreneur, moved to Mexico after Maximilian was named emperor bringing the recipes and techniques for these French bitters with him. Even though Maximilian met a rather inglorious demise, Vallet remained and his bitters became an integral part of Mexican bar culture. They were actually made in downtown Mexico City until the early 2000’s when a government revitalization program pushed them out of town to Hidalgo where they’re made to this day. The same family made it and never exported it over a 130 year history. Then something changed.

Jacob Lustig grew up between Oakland and Oaxaca and has been in the spirits business for quite some time. A while back a friend in San Francisco, Duggan McDonnell introduced him to the Italian amaro Averna which he just as quickly fell for thinking “this is a really delicious combination of bitter and sweet, I was late to the party.” But quickly he realized that the novelty of the bitter was offset by a cloying sweetness. He started searching for something further on the bitter spectrum which led to his friend Chuck Giometti who was responsible for bringing Jägermeister to the US. Lustig says that “Chuck kind of knows about all the bitters of the world. I called him and said ‘hey I just got turned on to this, but I do Latin spirits, is there any history of this in Mexico?’ Chuck said ‘there’s this family in Mexico City who does these bitters…’”

Lustig was in Guadalajara at Equipales, one of the oldest and most classic cantinas in town, and asked the bartender about it. The bartender pointed to an old dusty, cobwebbed bottle way at the top of their bar. It was that mystery bottle that exists in every bar, Lustig had seen it his entire life without realizing what it was so he got the bartender talking and learned that it used to be an ingredient in a popular hangover cure, the “La Piedra” cocktail (more on that below). From there he set up a meeting with Royal Vallet and worked out a deal to import it into the U.S. in 2010. Since then he’s kept the two key bitters on the market along with their original labels.

The third bottle in the portfolio is completely new but represents a lost tradition. Granada means “pomegranate” in Spanish and came about because Lustig missed the old pomegranate Vallet and was thinking about the original Campari that was made without artificial flavors. Lustig worked with the Vallet house chemist over three and a half years of trials and false starts, in 2017 they found their sweet spot and released the Granada Vallet at 40% ABV because that’s where everything sang. They bottled and shipped it and then started hearing from bartenders that as much as they loved it, the high alcohol percentage overwhelmed the base spirits in cocktails which necessitated a return to the drawing board. They managed to get the ABV down to 32% and that’s the bottle now being shipped.

Back to the cochineal

One of the critical ingredients of the new Granada is cochineal which Lustig remembered from his youth in Oaxaca. Cochineal is a distinctive red color made from an insect which inhabits the nopal pads of cacti. It was traditionally used as a dye and is still used in traditional textiles in Oaxaca. If you travel to Teotitlan de la Valle, a traditional rug weaving hub just outside of the city of Oaxaca, you’ll still find weavers using it. Cochineal impressed Europeans with its vibrance and Oaxaca quickly became a huge source for dyes that found their way into textiles and even Campari until later in the 20th century beet dyes supplanted it.

Today Campari only uses cochineal coloring for one country, Sweden, because local laws require it. And, it seems that Capalletti is the only other amaro still using it. As Lustig was creating the Granada he became really impressed with cochineal’s history but also because it fit perfectly with the ethic that governs everything in his portfolio, “like all of my products I wanted it to be totally natural, no synthetics.” Plus, it has other virtues like incredible staying power, Lustig told me that he left a bottle of his Granada out in the sun for six months and that it didn’t discolor a bit.

What makes it bitter?

Aside from the cochineal the ingredients for each label are listed clearly on the bottles and in the promotional materials around them. Lustig told me that “This product like all of my products I wanted it to be totally natural, no synthetics. That’s why I publish my ingredient list, you deserve it.”

The bitters are infusions, not distillations. They take burlap bags of the ingredients, create tinctures by soaking their contents in high-proof aguardiente from Veracruz (a neutral cane spirit) and then mix the tinctures according to their recipe. I haven’t been to the production facility but Lustig desired it as “more like laboratories with lots of tanks in them.”

An eddy of this conversation is the question of who owns the term Fernet. Most people have heard of a single Fernet, Fernet Branca, the major Italian brand which has existed since the mid -19th Century. But Fernet is actually a style of a very herbal amaro and there are many Fernets out there. Originally developed more as an herbal remedy for all that ails you, it never quite lost that medicinal association. As Lustig told me “people always say ‘this tastes like cough syrup’ well, there’s a reason why, it was the cough syrup of its era.” And it was incredibly popular inspiring various versions including the one that Vallet created in Mexico City in 1882.

While I love sipping these bitters most people will use them in cocktails. The Fernet-Vallet is a great substitute for any bitters while the Amargo-Vallet can be used in place of Angostura. The Granada has its own charms that should be experimented with extensively. A few ideas to get you started:

A legendary hair of the dog cocktail that also happens to be a legitimate cocktail in its own right.

Mix the anis/pastis with the vodka over ice, stri in the Fernet, strain and serve up. Many recipes call for a sparkling water back which, I assume, is designed to clear the palate and help settle the stomach. Garnishing this with an orange peel really makes it pop but also transforms it from hair of the dog to something you’d expect in the evening.

One local Guadalajara variant replaces the vodka with tequila which makes it even more flavorful.

Corey McCollow who bartends at Nido in Oakland created a cocktail that really resonates.

Fill a cocktail shaker full of ice. Pour all ingredients over ice. Shake vigorously and serve up in a coupe glass washed with Mina Real Mezcal.

Argentina’s national drink is dirt simple and could change your life. Equal parts Fernet and Cola over ice and you’re done. Adjust the proportions as you like. Adding an orange slice is also nice.