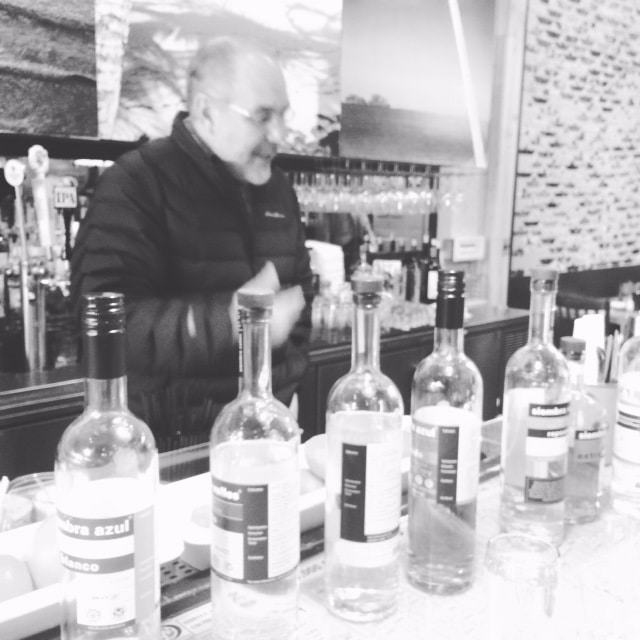 It seems hard to believe that our paths hadn’t crossed before but I finally had the opportunity to meet David Suro, he of Tequila Restaurant in Philadelphia, the Tequila Interchange Project (TIP) and Siembra Azul Tequila. For a good picture of the man and his passion for agave, be sure to checkout the great interview The Kitchen Sisters did with him a few years back.

Suro is in town doing a series of trainings and tastings for his Siembra Azul Tequila and Siembra Metl Mezcal. A special dinner at Oakland’s Calavera on Monday, a happy hour at Loló Tuesday, and a training and talk at ABV Wednesday. A whirlwind of activity for sure.

So what’s on Suro’s mind these days?  In no particular order, bats, continued education about agave, the proposed NOM-199, and his push for greater transparency in the industry. And as much agave gospel he preaches, he still knows it is up to the consumer to drive demand for a better industry.

So let’s start with the bats and their key role in the genetic diversity of agave, particularly in the fields in Jalisco. They pollinate agave and ensure that it’s offspring are genetically diverse which means they’re less susceptible to disease. The tequila industry currently plants mostly clones which means that any disease which appears can whip through the entire crop without mercy. The simple solution is to plant more agave from seeds but not only for tequila, the bats won’t survive if the industry continues planting clones. This issue zoomed from the halls of academia to front page news thanks to National Geographic’s story last March.

Suro is explaining all of this to the bar staff at Loló and they are all fascinated. We are casually sipping through his line of tequilas and mezcals as he talks about the production processes and the growing shift of tequila producers  to making a more traditional product. Honestly, you can taste it in the product. I mostly stopped drinking tequila after getting into mezcal because, well, the flavors seemed flat in comparison to the complexity of mezcal. Siembra’s tequilas are sublime and rich and so deep. They would more than hold their own against a lineup of mezcals. I ask Suro if he thinks the tequila industry could follow mezcal by creating a new NOM similar to the proposed NOM 70 that distinguishes the different types of productions – ancestral, industrial, etc. He said that he would definitely support this kind of move but noted that the impetus would need to come from consumers demanding for these kind of distinctions. “Education from the bar is key,” he said. At his restaurant, they have a special program that calls out a product on the menu that is producing product in a more conscientious way. This is the first step in helping educate the consumer about why they are paying a higher price point for their cocktail.

“The culture of the kitchen has to carry over to the bar,” Suro said in talking about the shift that has taken place in restaurants over the past 5-10 years and the focus on farm to table and sustainability issues. “This is how we change it.”

After the training, Suro and I had a chance to talk about NOM 199. “It’s just terrible and has been written so completely tight with a team of lawyers that understand denomination and are able to use it to their advantage with this new proposal. The whole issue of denomination in Mexico makes no sense. Talk to a small producer in Jalisco about what they are making and they say mezcal, and yet Jalisco, the birthplace of distillation, doesn’t have mezcal denomination.”

The Tequila Interchange Project, of which he is president, is circulating a petition against the NOM 199 proposal. While comparisons have been made to the proposed and then discarded NOM 186, this is a completely different animal. “This is the entire spirits industry, not just agave spirits.” Suro expresses frustration that rather than create clear and cohesive uses of words like agave and maguey, you are adding more confusion by allowing the different sectors to “own” different words. This is in reference to NOM 199’s signature bit of linguistic butchery: It would force any agave distillate made outside of areas already officially recognized by the Denominación de Origen to label its source material as “komil.” So, say you’re making a mezcal in Puebla. Not only could you not label it as a mezcal, you couldn’t even say it contained agave which would certainly cause great confusion in the marketplace and probably doom commercial efforts.

Suro is concerned that NOM 199 will get through as the TIP petition currently only has about 2,500 signatures. For 186 they had about 7,500. We briefly talk about doing a big push and hope to do more to promote the petition and issue starting in the next few days.

At this point in the conversation we are handed margaritas made with Siembra Azul. It is tart and fresh and utterly delicious and I think, I really have to go to Jalisco. I meet his wife, Annette, and am then pulled into another conversation.