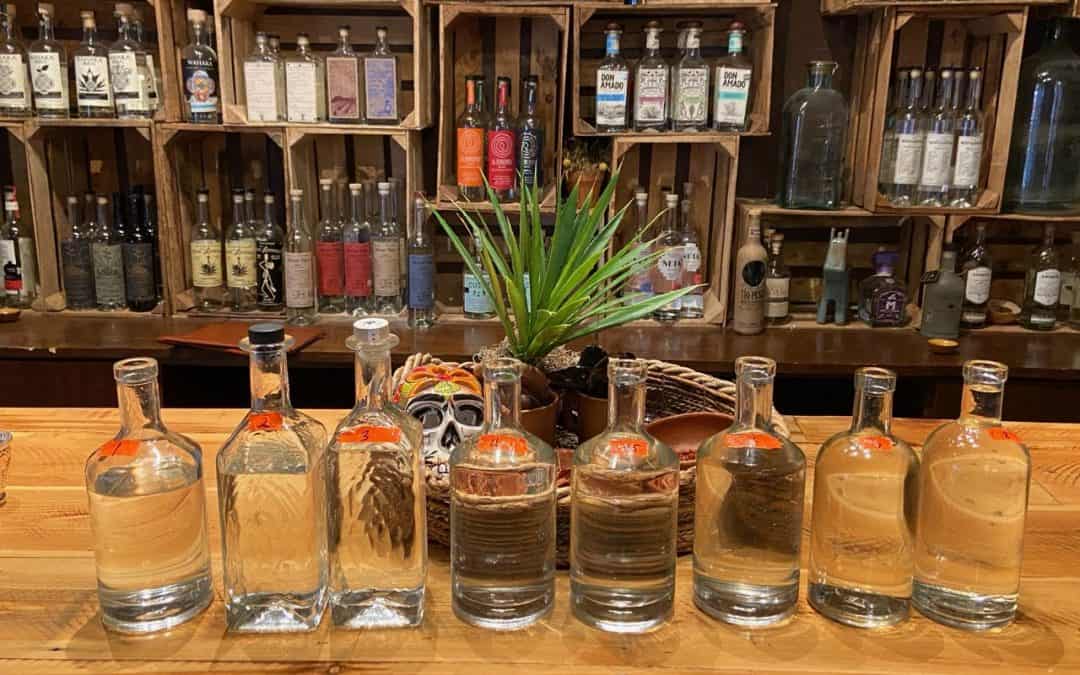 Most blind tastings are done to award points and medals all based upon someone’s preferences and sometimes, politics and money. I’ve had the opportunity to be a part of such judging competitions and on occasion, I still score products (blind) for the Tequila Match Maker app. I will say this, the same products that I rated two, five, ten plus years ago would not receive the same score from me today. Why? My palate has changed and so has the product that is being made today. In the end, it’s all subjective and the target is always moving and my opinion is worth about two cents.

If we are going to speak about agave spirits with the same reverence as wine in regards to terroir, variety, production, region, and producer well, let’s make this a real conversation, and that is what our entire “What’s In Your Mouth” blind tastings are all about. “What’s in my mouth”? Yes. In order to help move this conversation along, we set out to create a blind tasting that is not qualitative, but one that challenges you to be able to identify every aspect of what is in your glass; the agave, cooking method, milling, distillation, state, region, brand, producer. As someone mentioned “that’s some heavy somm shit”. Pretty much. We began this series in November of 2018 in San Francisco, and followed that up with tastings in San Diego, Denver, and again in San Francisco in 2019. We just completed our first one for 2020 in San Diego.

What’s in your glass

Each tasting has featured eight to nine agave distillates that are made from cooked agave and produced with any style, from anywhere inside of Mexico – these are the only parameters that we set for what is curated and what we tell each attendee. These tastings are very fun but also super challenging as it does take quite a bit of continual practice. At our first tasting in SF, we had to do three run offs between Zack Safron and Rion Toal before Zack won the crown. Daniel Condcliff crushed everyone in San Diego and Jesse Torres killed it in Denver for 2019. Rion Toal took the top prize in SF in Round 2 for 2019. Zack’s lack of practice hampered his defense for sure! For this year in San Diego, we had one really interesting run off between Clayton Szczech and Darian Martyniuk with Darian taking home the pride and prize back to Chicago.

In each of our tastings, we have had a wide range of delicious products made from different agaves from Sonora to Oaxaca and with each of the different methods that can be used to make a distillate from cooked agave. With that said, we threw a wrench into this year’s tasting in San Diego. No, we didn’t use any difused jive – we are not that cruel! But what we did do was an entire lineup of artisanal and ancestral mezcales from regions east and west of the Central Valley in Oaxaca made only with espadín. Needless to say, of the 20 attendees, not a single person was able to identify them all as espadín. People had guessed everything from cupreata to tepeztate and everything in between. The aromas, flavors, and textures of each of the eight distillates that we had were vast and amazing – and that right there is what we wanted to highlight! There are so many people who have never even been to Mexico and get all snooty about only drinking silvestre agave commenting that tequilaña and espadín are “boring”. Well the point of this tasting was to show that espadín is far from “boring”. If we talk about sustainability of mezcal in Oaxaca, we need to understand that it needs to be done with espadín and there are a lot of people out there who are making incredible mezcal with the only viable crop that can not only help the category of mezcal grow, but also allow these small producers to flourish.

And what does the winner receive? We do the unimaginable and make a blend of the bottles that are left-over with the winner getting a bottle of that special moment in time. For those who are not aware, an ensemble is a distillate that is produced with various agaves cooked, milled, fermented, and distilled together as one product. A blend is what is made after distillation and can be of different mezcales from the same producer or of different producers.

While the blends that we have made in the past were super interesting, I will have to say that our blend really did taste like many of the big brand products on the market today, though of course that could change as the flavors settle over time. With that said, if it is providing for a better life for multiple producers, then let’s celebrate that fact. At least it isn’t coming from a mega diffusor facility.

What’s on your palate

So…how does one develop their palate to be able to identify each aspect of the distillate? There really is not one specific way of doing so other than consistent practice. One way I can recommend is to taste three distillates – no more than a half ounce of each – of the same agave from the same region. Notate the similarities. Notate the differences. Learn to recognize the familiar traits of each region. Learn to recognize the traits of each agave. Of each producer. Do it over, and over, and over again. Get down to all the different regions of Mexico and visit these producers, smell the air around each palenque/vinata/taberna/fabrica. Taste the cooked agave, what is in the fermentation tanks, and what comes from the stills. Eat the food around and near these producers. Let all of that become part of the memory bank of your plate and your soul. Enjoy the journey, keep practicing, and remember the target is always moving.

At the end of the day, it matters not what is in our glass or in our mouth, but what we can do to help these small producers and the regions around them to grow and sustain their production for generations to come. What brings us enjoyment is giving life to others and we are extremely fortunate to be able to help make a big difference in their lives.