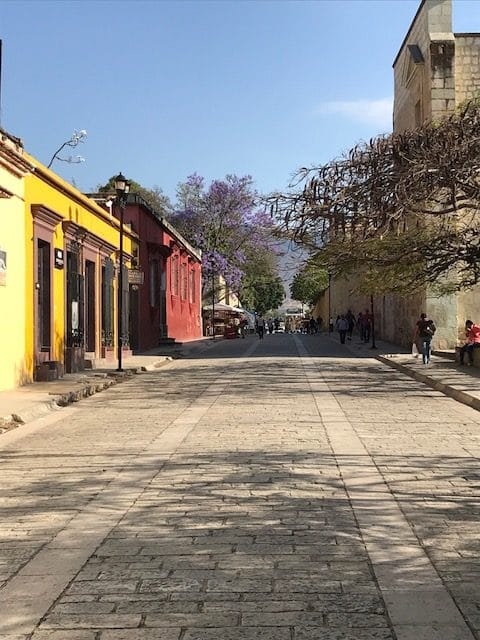 Taking advantage of proximity and the Tijuana airport, I took a quick trip to Oaxaca right after our recent Mexico in a Bottle event in San Diego. The semi new border crossing (CBX) that takes you from the US side of the border directly into the Tijuana airport is terrific and seamless and enables US travelers to take advantage of far less expensive flights within Mexico. Even paying the cost of the border crossing ($30 roundtrip) and the visa ($25 which is included in the international flight) makes it worthwhile. Between my roundtrip flight to San Diego from Oakland, and then the direct flight from Tijuana to Oaxaca meant a total cost of $350 round trip, far less than the usual $650 ticket price. I envy you SoCal people for having this so close at hand.

Though only seven months had passed since my last trip to Oaxaca, so much had changed. The dire (and frankly overblown) warnings about travel to Mexico from the US State Department have thankfully had little impact on travel to Oaxaca. The city was packed, and filled with not only the culture curious, but also the mezcal focused tourist. This is great for a town reliant on tourism dollars, and a sign that the sleepy days of old in Oaxaca are likely a thing of the past.

This trip was a bit of a blitzkrieg for me, with the majority of time spent out in major mezcal producing pueblos. I was keen to see the impact of the ramp up in production, and what was happening on the ground. It was a trip that produced more questions than answers as I visited palenques both small and large and saw the increasing number of fields filled with new maguey cultivation. It was quite eye opening, and while Oaxaca has seen this kind of boom previously, it has also seen the busts which have led to an overabundance of maguey followed by shortages as people did not replant. It is hard to imagine another bust given the projections of growth and demand for mezcal, but it weighs heavily on the minds of the people who have lived through this before and certainly lends to the ‘must take advantage now lest something happens’ attitude. A very real sense of a gold rush mentality, and one I am fully acquainted with living amidst the tech gold rush feel of San Francisco.

The day I arrived, the New York Times had just published an update on its 36 Hours in Oaxaca. It included the new list of must eat at places, which was nice to see given how many times the same places are put on everyone’s list. And if you want to know if anyone reads the NYT in Oaxaca, well let me tell you, the line at Boulenc, a fabulous bakery cited in the article, only got worse and has reached Tartine level lines – which as the people in SF know, means waiting a good half hour to forty-five minutes to get seated.

The little time I did spend in the city, as most of my time was spent out in the country, more often than not I heard an abundance of English and German, and far too many conversations about starting a mezcal brand, the Oaxaca equivalent of talking about your new app or series B funding. I was struck by how easy they made it seem – oh let’s just start a mezcal brand and make a lot of money – where as the reality is so much harder, and of course darker. Protest art on the streets of Oaxaca

These conversations all happen amidst the backdrop of unrest. The leader of the CTM, the major transportation syndicate (think Teamsters), was murdered the day I arrived, throwing the city into a frenzy of discussions about how bad the bloqueos would be and dire warnings that everything would be shut down. I know that I spent a good portion of the evening monitoring the situation with Darinel Silva of Experience Mezcal as we were headed out of the city the following morning, or so we hoped. While the murder was a more extreme situation, the reality of bloqueos is the new normal that everyone operates within.

But the flow of tourists increases and they are for the most part oblivious to what is happening, because the centro is in many ways buffeted from the world around it. I was there during a long weekend just before Semana Santa and everything was packed – restaurants, the streets. The usual mezcal guides were all booked, and the two Airbnb’s in the complex where my friends live were full up with young people. It is clear that Oaxaca is now fully and completely on the map.

The changes in Oaxaca are enormous and for lack of a better phrasing, I will call it hyper-mezcalification. These changes are transforming the economy, the environment and the culture in ways both good and challenging. If you have the means, this is a great time. There are so many new car dealerships lining the major roads in and out of town, and “luxury” housing units, in that artist loft space style, being built in the neighborhoods north of the city in the formerly quiet neighborhoods of Colonia Reforma, Estrella, La Cascada, to name just a few. There are more and more stylish restaurants that have opened in Colonia Reforma, a combined sign of how the city is flourishing and how restaurants, tired of the increasing rents, blockades and up and down cycle of tourism in the centro, now see this area as more reliable.

There are people taking advantage of the influx of travelers and are renting multiple places and then re-renting them on Airbnb. The people with means of course usually are not locals, and the impact of this Airbnb boom, much like in every other city driven by tourism, is a shortage of housing, and increasing rent prices. This is not new, and in fact this has been an increasing trend over the past three years. The intensity and rapidity of change is what is new – again, that hyper-mezcalification. It would be easy to apply the word “disruption” to what is happening, but that makes it seem almost benign, when it fact it is a complete upheaval of a societal structure that has been in place for hundreds, if not thousands of years. Ironically, what has driven interest in Oaxaca is this whole idea of authenticity or tradition. What it has led to is, what a friend recently told me, something that is now closer to Williamsburg.

In truth, what this stampede to Oaxaca reminds me of is that time after the Berlin Wall fell and Eastern Europe opened up. So many of my friends, recent college graduates, flocked to Prague and Budapest because of the opportunities presented to them because they were from the US, and therefore had some ingrained sort of business expertise.

My last night in Oaxaca was a blissfully quiet one. After a week of baths by bucket because there was no hot water, the plumber came and flushed the pipes and I took my first warm shower. There was a bit of a lull on the streets, a between time before the insanity of Semana Santa. It was also a Tuesday and several places were closed. I met up with some girlfriends and we wandered around before finally settling on something, P’al Dolor, a semi new stylish restaurant with its own mezcal. We talked about the #metoo impact and generational and cultural divides and then we finished the night drinking cold beer at Txalaparta, where I heard not one person talking about their new mezcal brand.