Journey to the Sierra Norte and Mezcal Tosba 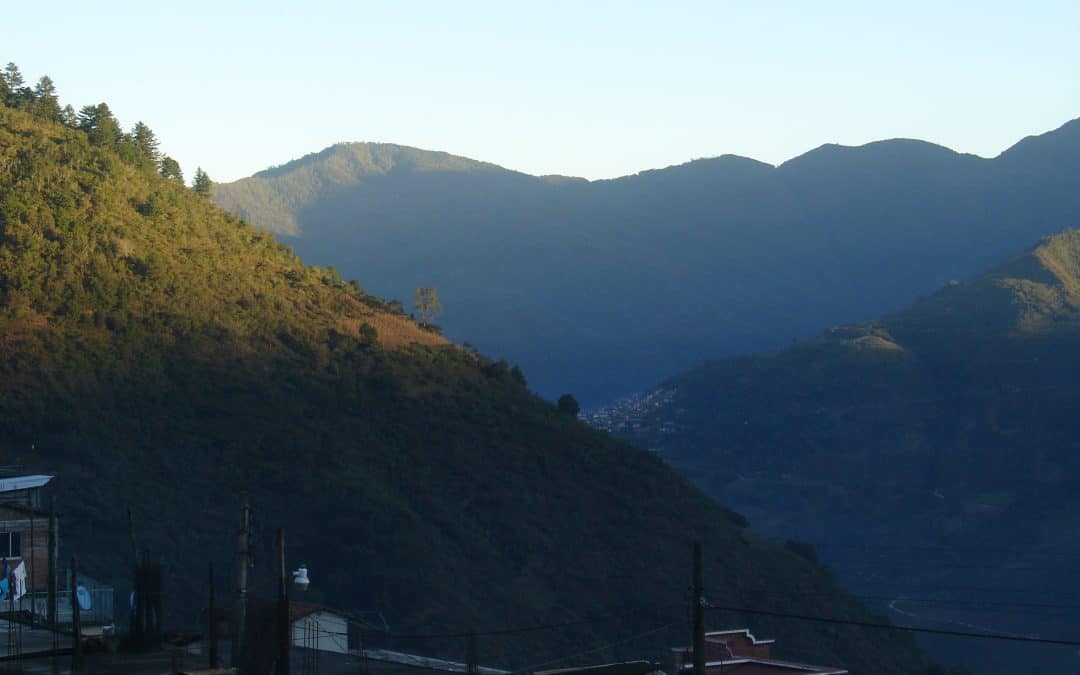 One of the best things about going to palenques in Oaxaca is it usually means traveling to some of the most beautiful parts of the state. It also means traveling on some pretty rough roads, but more on that later.

I first met Elisandro Gonzalez-Molina in San Francisco at a mezcal tasting. He is one of the forces behind Mezcal Tosba, the other is his cousin Edgar Gonzalez-Ramirez. They are from the small pueblo of San Cristóbal Lachirioag in the Sierra Norte, a gorgeous and mountainous region northeast of the city of Oaxaca, and also one of the poorer regions in the state. Primarily Zapotec, with Mixe pueblos mixed within, it is primarily alpine dotted by of tropical microclimates, not unlike what is found on the western side of the coastal mountains of Oaxaca.

Elisandro and Edgar came to the United States, like many of their pueblo neighbors, in order make a better life for themselves and also to send precious dollars back to San Cristóbal Lachirioag, a lasting legacy of NAFTA, that decimated these small agrarian pueblos in many parts of Oaxaca (and of course all over Mexico.) While in the US, they spent time talking about what they could do to bring economic opportunity to their pueblo, and staunch the flow of young people north. The idea of Mezcal Tosba was born; magueys were planted on Edgar’s family milpa beginning in 1999. In 2006 Edgar returned to Oaxaca to learn how to make mezcal.

The Sierra Norte is not a region currently known for mezcal production. Palenques had existed, but with so many people leaving the land for better opportunities, many of them were abandoned and the tradition began dying out. Far more common in the region was aguariente (a distilled beverage made from sugar cane), coffee and pulque.

Visiting Tosba soon became a obsession for me – not only for the opportunity to meet Edgar and see the Palenque, but also to have an excuse to travel to the Sierra Norte, where I had never been. Arranging it was another story – back and forth with Elisandro, coordinating with Edgar during one of his weekly trips to Oaxaca (there is no cell phone service in most of the Sierra Norte) and finally a meeting at In Situ to coordinate the details, including a map of how to get there.

There would be four of us on the journey – me, my partner in mezcal crime Ana JB and In Situ owners Ulises Torrentera and Sandra Ortiz Brena. We rented a more or less sturdy car (why car rental agencies in Oaxaca insist on using white cars is beyond me) and left the city at the crack of dawn on a Sunday morning.

I took the first leg of driving, mostly to ensure I’d be driving the “best” roads. Our plan was to hit the market in Ayutla, a Mixe pueblo high in the mountains. We found a bustling commercial center where colectivo trucks unloaded people and their goods, and crisp in the clear, and quite cold, air. Luckily there was delicious coffee to be had and a filling breakfast of chilaquiles, enfrijolades and the best damn tortillas I have ever had (their rich corny flavor haunts my dreams to this day – think of the tortilla equivalent of the bread from Tartine.) We walked the market, taking in the sights and sounds of Mixe and Zapoteca being spoken. We bought green coffee beans, flor del maguey, chilies and carne; the last to cook later that day at the Palenque. And then we found the pulque and tasted the seemingly infinite varieties and flavors to be found. Side note – I would travel for pulque and could become as obsessed with it as I am with mezcal.

We piled back in the car, though not before a couple of palenqueros called out to Ulises – we were after all traveling with a mezcal rock star – who were anxious to have him try their mezcals. It was not quite 9:30am.

I let Sandra take over the driving, a good thing because from Ayutla on it was dirt road – washed out, rutted, impassable during the rainy season, cliff hugging, you name it. The views were stunning and a constant reminder of just how high we were and just how far a drop it was off the edge of the road. I will never ever ever again complain about the pinche suburban trip to and from the coast in Oaxaca.

The palenque is nestled in one of the tropical microclimates. It is completely self-sustaining, growing everything needed for mezcal production – maguey, wood, fruits and vegetables – you name it, it grows. Currently there is one roasting pit, with plans for another. There is a large adobe building that will eventually house the bottling and labeling facility. Currently mezcal is transported to Oaxaca where it is bottled. There is a large tin roof covering the crushing area, the three fermentation barrels and three stills. There is no electricity, though Edgar is making plans for either solar or river generated power.

We ate papayas and lemons as Edgar showed us the lay of the land. He is utterly engaging and wickedly smart. In addition to the savings of the two cousins, they also secured a loan from FAO PESA, a UN funded program that provides capital for projects like these. Tosba makes three mezcals – an espadin, a tobala and a pechuga. Water for the mezcal comes from the river that flows down the mountain to the valley.

It is stunningly beautiful at the palenque – it is surrounded by mountains and the play of light. So gorgeous and peaceful, we spent the afternoon talking mezcal and life. Edgar’s parents and sister arrived and we ate tlayudas and sopa de guias (a squash vine soup that is divine) and grilled meat and guacamole. And again I was struck by how delicious the tortillas were. I was even convinced to drink the water that came straight from the river (oh I put up a fight because it went against everything my traveler instinct told me.) It was delicious and I have to say, this is what makes the flavor of Mezcal Tosba so delicious – it really does taste like the water – fresh and slightly sweet.

After the meal, we set-off to hike to the waterfall and to see the maguey and the rest of the milpa. Edgar grabbed his rifle (jaguar country) and we set off. We walked the paths through the magueys that hugged the mountainside and eventually found ourselves walking under a canopy of trees as we neared the waterfall.  We stood in silence as we listened to the water moving over the rocks and looked upward as the fading light sprinkled through the leaves. We walked back through a grove of mango, looked over at the sugar cane, stared in wonder at the pineapple bushes and then finally returned to the palenque to watch the sunset across the valley. As it turned pitch black, we lit candles and stared at the stars as Edgar regaled us with tales of the jaguars, how he lost his eye while cutting maguey and hitting a stone (now all of his employees wear eye goggles) and other nights spent under the stars. We may also have engaged in ghost stories, but I will neither confirm nor deny that.

We finally decided it was time to head back to town – the trusty Sentra taking us back up to the car, which eventually took us back to town. We arrived in time for the posada celebration complete with Banda music and dancing and pan dulce. After, we went to Edgar’s parents, where we were spending the night. Somehow there was more food to be consumed, more mezcal to be had and more talking to be done. We tried the new espadin, which prompted an intense back and forth between Ulises and Edgar about why it tasted different than the last batch. Were the maguey from a different altitude – with the answer yes. It seemed impossible for me to believe that a 50-meter difference could change the flavor, but it did – though I only noticed after Ulises had said something. Oh to have his palette!

And then it was time for bed. It felt like the middle of the night but in fact it was only 10pm.

But sleep would elude us that night. We were awoken by the jarring sound of Banda music over the municipal loud speaker at about 4am. If you haven’t heard it before, think John Philip Sousa on crack. Oddly, it was followed by Strauss and kept going till about 6am when we finally gave up on getting any more sleep. Sadly, a local musician had passed away during the night, and this was his tribute.

We filled our mugs with coffee and headed up to the terrace to watch the sunrise. As the light came over the top of the mountain, the strains of Ave Maria wafted from the loudspeaker. We sat in silence as tears rolled down my cheek as I thought at that moment I was as close to my sister who had recently passed away as I could hope to be. It was majestic.

We then headed to Villa Alta for the Monday market, loaded up on baskets and chiles, dropped off Edgar and said our farewells, and then began the long trip back to Oaxaca. Chilies at the Ayutla Market Beans at the Ayutla market The view in the Sierra Norte Dancing in the square in San Cristóbal Lachirioag