Addition of Aguascalientes to the DO sparks resistence 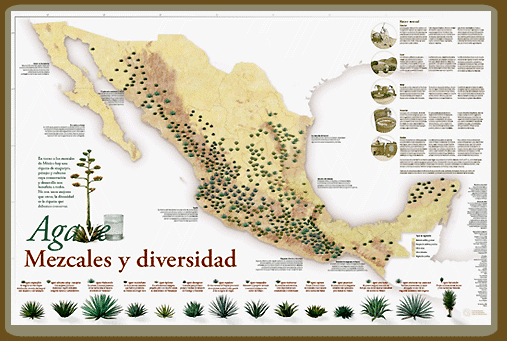 The Mexican Industrial Property Institute known by it’s Spanish language acronym IMPI recently expanded the number of states that belong to the mezcal appellation. IMPI added the three states of Estado de Mexico (the state that surrounds and includes Mexico City), Morelos, and Aguascalientes. That means that the Consejo Regulador del Mezcal, the CRM, which is the Mexican semi-governmental body which regulates mezcal, can now certify mezcal producers in those states as legally producing mezcal.

A quick step back and introduction for those new the question of what constitutes a mezcal: As we’ve discussed elsewhere there are really two definitions, a cultural one where mezcal means anything distilled from agave and a legal one that says that you can only call an agave distillate a mezcal if it comes from a limited number of states and receives a certificate from the CRM. The latter is the Denominacion de Origen, the acronym is DO, the appellation of mezcal that most parties, Mexico, the United States, and many of the biggest markets in the world agree to resptect. The DO is supposed to represent a tradition of mezcal production and seal that into law like champagne, parmesan cheese, or innumerable other products with a deep cultural history. Whether it always works out that way is another question. And, there are plenty of other open questions like whether this approach serves the product and people of the mezcal world the best and even whether it’s very intellectually honest. But no matter how you think about it, the legal question is pretty clear, if you want to label your product as mezcal globally, you need to get a certificate from the CRM first.

So, when the IMPI changes mezcal’s appellation, especially by adding three whole states, it’s a rather big deal. It means a greater volume of mezcal being added to the market at a time when mezcal is the fastest growing spirit category which also is experiencing some identity growing pains around whether it is mostly a cocktail ingredient or something to be sipped, whether it’s a product of small distilleries or larger industrial facilities, and who is really gaining from it.

These questions get especially sharp when you think about the three states in question and their history with mezcal. Morelos definitely has a long and storied history of mezcal production. The Estado de Mexico definitely has made mezcal for some time even if it was primarily known as a pulque producer. Aguascalientes is the outlier and the big surprise in this announcement because if there is a long history of mezcal production there, very few people in the mezcal world have heard about it. Mezcal has definitely been produced there and has been for a while but does that mezcal production tie back to some deep cultural tradition that the DO is supposed to represent? When the announcement arrived, many people in the mezcal world answered in the negative and very quickly started organizing against it to the point where the CRM and the Governor of Oaxaca, Alexander Murat, issued a statement expressing concern that states were being added to the DO that do not have a cultural history of mezcal production.

“It is important to emphasize that the creation of a technical committee that acts with impartiality and without political pressures is the way to dictate which communities are granted DO, and to enter only those that demonstrate they have native maguey and a history of cultivating and cultural legacy in the production of Mezcal. The opposition to the entry to the DOM should not be questioned until the impact to the economic development of the communities currently protected by the DOM is determines and question whether these communities really represent the liquid culture of Mexico, and if they have the DNA of the Mezcal, only then you should recognition be given like a son to his father.”

The full text, in Spanish, can be found here.

But, this went beyond a mere issued statement and resulted in an organized caravan traveling to Mexico City and taking to the streets ahead of the start of Agave Fest, one of the largest tastings and celebrations of agave spirits in the world of mezcal. This is no minor protest, it has brought forward some long standing divisions regarding what an effective DO is.

Clearly the straw that broke the camel’s back was the inclusion of Aguascalientes – it was a surprise to everyone (perhaps except for Aguascalientes, to date we haven’t heard any perspectives from that state). We’ve been hearing rumors for a while that the Estado de Mexico was going to be included, it had that tradition and Morelos is a known quantity in mezcal traditions. But Aguascalientes was a head turner and quickly led to questions about why they were included. The rumor is that they got in because the state grows quite a bit of blue agave and salmiana which as been used by many mezcal producers as a supplement or source for mezcals produced elsewhere. So, maybe this was their play to say, ‘ok, it’s time for us to get some recognition and be able to make mezcal from our own agave.’

Assuming all of this is correct, who can argue with that idea? Well, in a nutshell, that’s the main question about the DO which is ‘what is it supposed to mean and who is it supposed to serve?’ The rhetorical thrust of the protests from Oaxaca is that Aguascalientes doesn’t have a long history in mezcal but really, does that matter and should it? Especially when you consider that the DO doesn’t address these histories. It recognizes the state of Oaxaca, but not the varied mezcal production traditions within Oaxaca like distilling in clay in Santa Catarina Minas.

To flip this around a bit, most DOs around the world are structured to represent a historical tradition and make great pains to define themselves on that basis. In Mexico this hasn’t been the case so far, the DO for tequila especially has adjusted itself to market changes and the DO for mezcal seems to be doing the same sort of thing. The huge arguments about NOMs, the laws that govern mezcal, over the past few years that saw a huge push for industrialization with NOM 199 and ultimate compromise in NOM 70 meant that everyone and no one won. The clearest thing you can say is that it didn’t provide much clarity. NOM 70 clearly lays out three categories for mezcal one of which is “mezcal” which allows pretty much anything to happen to that juice. So, what does that say about the clarity of definition in a DO and adherence to tradition? We’re not the first people to say this, we’ve published opinion pieces about it, and this article by Luis Nogales, a long time writer and educator in the world of mezcal, takes the bull by the horns with his battle cry – The Denominacion del Origen for Mezcal must disappear.

This argument really feels like it erupted at a very strange moment. NOM 70 is law, lots of people aren’t exactly comfortable with it, Mexico just had a generational election, issues nationally and locally abound. People are clearly using the addition of Aguascalientes for political benefit, but there is also a big question of whether it’s time to make definitions mean something again. One of the bigger issues looming behind this is that many Mexicans in the mezcal world feel that this is about much more than just a business. It’s essential to remember that this is a very very very emotional issue for mezcal producers, especially Oaxacans, who have an extraordinary cultural identity wound up with mezcal. There is pride in that history and its continual life, pride that it’s a livelihood, pride that in its international recognition. There is also plenty of disgust with the way that laws have tried to redefine that culture which has only built over the years. The stakes are high given the demand for mezcal and the questions of who can benefit from making it. This might just be the proverbial spark that was needed to light the fire under this much needed re-examination of the DO.

We’ll keep you posted as the conversation develops.