About that small producer… 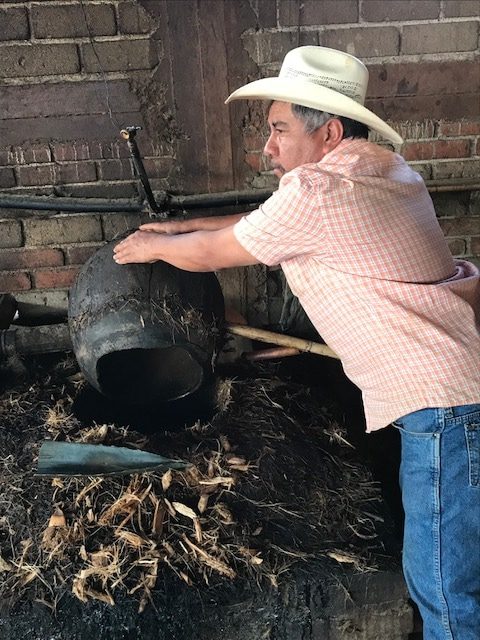 I am subscribed to several Facebook groups all about mezcal, and a common theme is the one of the small producer, though exactly what a small producer is a question unto itself. In the international world of spirits, let’s be frank, everyone in the mezcal world is a small producer if you look at the actual volume produced. Let’s say for the moment that the biggest players in the category produce maybe 200,000 liters a year – that is peanuts in the alcohol world. For the category to get anywhere near tequila’s production levels will take years and of course will require gigantic production shifts – something most of us obsessives are not keen to see, not even some of those brands we see as the big guys. 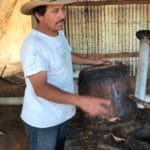 Maestro Arturo Martinez at his still 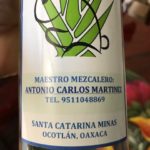 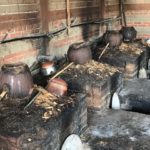 The distillation set up at Maestro Felix Angeles’ palenque 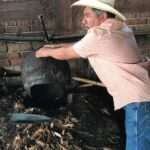 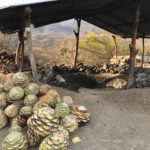 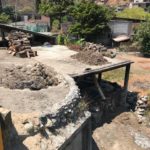 So who do we mean when we say small producers? We all probably have this image in mind of the lone mezcalero working over a single still, dirt floor, salt of the earth, like many of the images above. And that image is probably the truth for most producers, they’re incredibly small, and make very little mezcal. There are still plenty of mezcaleros producing less than a 1,000 liters a year, and getting any of that mezcal to market requires a huge financial investment, which none of these makers have. In fact that is true for most makers making less than 10,000 liters a year.

This current boom cycle is driven by established brands or the people that have access to capital, usually from outside the state of Oaxaca, and especially outside of Mexico. These brands are driving production, and if truth be known, buying the majority of mezcal made by really small producers. Those mezcals are frequently funneled into a line of different expressions under the main brand name. In other cases they are blended together under a single brand name because demand is just so high right now that the focus is on volume rather than maintaining the identity of separate batches. This has created a trap for makers – they can’t sell into international markets on their own so they are “forced” to sell into this structure.

To be fair, this model could work out for everyone. Some brands are great at building the bridge that gets a small mezcalero’s mezcal to the international market while acknowledging the unique nature of the mezcal. But frequently that’s not what happens.

Several years ago, the CRM and Mexican government provided start up grants for people to build out palenques. This enabled small village producers to build hornos, buy crushers, tinas, and alembiques as well as storage tanks. They were able to build roofs over the palenque and, in some cases, bodegas to store everything. Not everyone received the same amount of money. Favors were doled out which created imbalances in communities because some producers were able to grow, while others were stuck, exacerbating what is known as La Envidia, or envy, not only within communities but also between communities.

Once a mezcalero was able to build out the facility, there were still the costs involved in certifying the palenque as well as registering an official business with the Hacienda, or CRT, which oversees business regulations, and most importantly, tax collection. To foreigners, or monied people outside the communities, an investment of $5,000 does not seem daunting. In communities where few people even have bank accounts, trying to come up with just $500 is an insurmountable challenge. We understand that the cooperative Maestros del Mezcal is putting forward a grant proposal to try and close this gap and enable these producers to jump this hurdle. We’re really excited to see their proposal exactly because this is such a major issue. But, in the meantime, it means if a small producer wants to access a market beyond their immediate community, they have to work with an establish brand or find an international distributor. None of this is new information, it is just increasingly obvious and more extreme.

Given all of the focus on the semi-new NOM 70, with all of its labeling and certification requirements, I was baffled by what I saw on the ground in Oaxaca. In the best case scenario, brands are operating above board, working to either certify the palenques that they work with themselves, or to assist in that process. However because of the current demand for volume, what seems to be happening is more of a wild west situation of brands or their distilleries buying mezcal from multiple makers and then blending them together at one certified location. The blending process is generally led by a master distiller, though now it appears that more brands are working with chemists to achieve the desired flavor, alcohol level, and consistency. Ironically, this is exactly what the new NOM and CRM were supposed to eradicate. In that sense, the market right now is fully supporting the small producer, just not in the way most people were thinking. 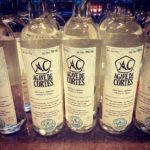 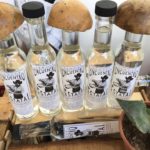 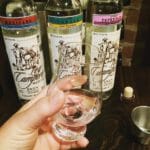 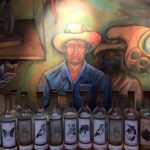 At the Almamezcalera tasting room 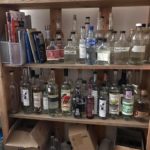 Some of the mezcal samples at the Mezcalistas office

So let’s speak frankly about the market for small producers, by which I mean a label or brand bringing small batch production into the U.S. market. We have some current examples from larger brands like Del Maguey and their Vinos del Mezcal series, Craft Distillers with their Mezcalero series, and Mezcales de Leyenda with their new Legendario series. But they are able to support these smaller projects because of the larger volume lines like Vida, Alipus, and Peloton de la Muerte. Then there are smaller brands like El Jolgorio that work with multiple small batch producers, but they, like the previously mentioned, also have their larger volume Agave de Cortes and of course the Nuestra Soledad line. Finally, we a have multiple and independent family owned labels like Rey Campero, Real Minero, and Tosba which do not have a separate volume line to help offset the costs of doing small productions. But they all face the same challenge, which is the reality that selling bottles of mezcal at costs upward of $150 in a market that does not yet fully value what is involved.

At our recent San Diego event, we had several small producers participating who are looking to secure an importer for their products. Among them were Ulises Torenterra and Sandra Ortiz Brena of In Situ Mezcaleria in Oaxaca. They bottle a number of very small production mezcals which are highly prized by aficionados. They’ve been working for some time to bring some of these bottles to the United States so prior to Mexico in a Bottle San Diego they did a research tour of mezcalerias in Los Angeles and came away dismayed by what they saw. The bottle pricing was so low that that they would never be able to compete. In American bars mezcal is sold mostly in cocktails or 1.5oz shots. For Ulises and Sandra, that would mean their small batch mezcals would end up selling for $30-50 a pour at their current cost structure. Sandra Ortiz and Edgar Gonzales of Tosba in deep conversation

If you are a small producer able to get through all of the preliminary hurdles of certification, registration, bottling costs, label design, taxes, etc, you then have to think about what you can sell your bottles for, knowing that along each step of the way the importer and distributor will each need to take their cut before the bottle ever hits the shelf. It is a delicate balance of how you are able to receive the true value for your product while trying to remain competitive in the market. Ultimately for brands like In Situ, it means weighing whether or not to cut their pricing by more than 15% and lowering their margins in order to be competitive with other products that are supported by larger entities like Pernod Ricard, Bacardi, Diageo, et al.

These small producers and brands ultimately will have to weigh what makes more sense –  selling to an existing brand to get product into the market at a lesser price, versus paying it all yourself. But what seems clear is that the current structure is not there to support small batch labels who want to be completely vertical or independent in their business model. Much of this is because the industry still sees the major market as bars and restaurants, which for the most part really does not work for these small guys because of the economies of scale and the costs outlined above. The hospitality market appears saturated with product. Brands like Vago have been successful in their approach to release small editions in specific markets, rather than trying to place them everywhere. This has created an almost cult like devotion of people vying for a specific bottle. We see a few other brands following this approach, which is great. But the retail market is still one that is wide open, as are collectors clubs, cigar bars, etc. It is a rare and specialty market and will require people to value these mezcals at the same level they do certain whiskeys, scotches, cognacs, and of course tequilas.

So where does this leave these small producers in the meantime? As we’ve said before, rather than people trying to create their own labels, they could put dollars into supporting producers who want to maintain control with their own brand. If people are truly interested in bringing small batch mezcal to the market, it should be looking at how to restructure import and distribution models that are more effective and impactful in selling this product in the market. And we should be looking at how to support projects that supply capital and finance direct to small producers. After all Ulises and Sandra are looking for someone to make their business to work. And they’re not the only ones.