Saving mezcal is a communal effort 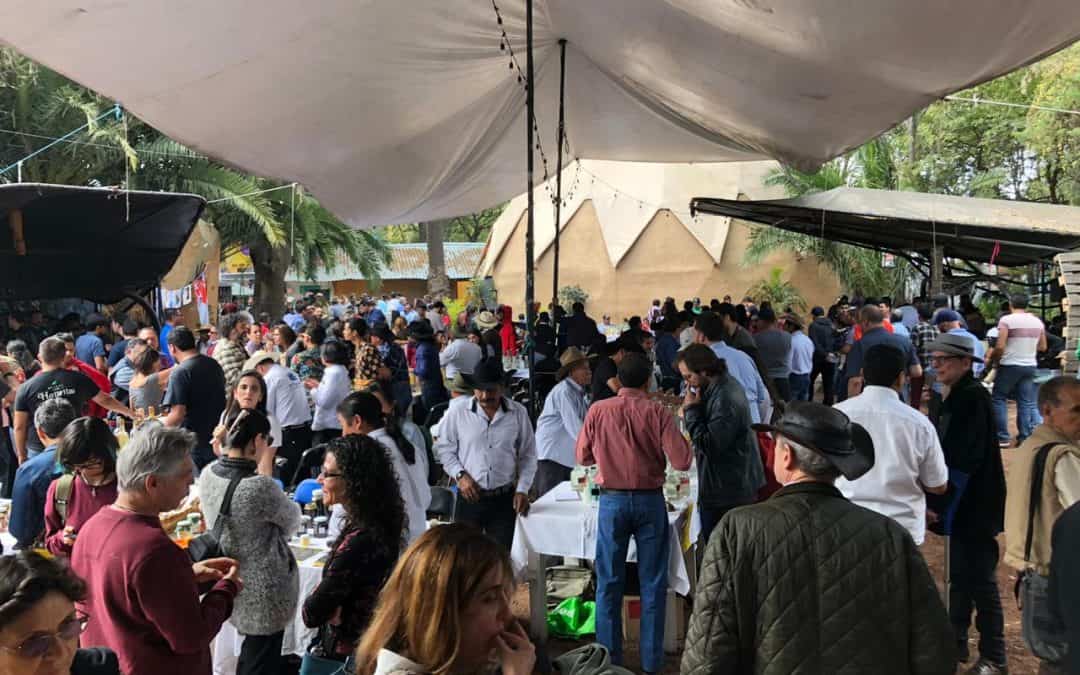 The below post is by contributing author Joahna Hernandez who is based in CDMX. We met Joahna several years ago when we produced our first Mexico in a Bottle event in Washington, DC. She is the founder ofManos de Maiz, a binational company that provides fresh ground masa to restaurants in D.C. and corn based foods in CDMX.

Perhaps the greatest challenge we face in today’s world is how to live our lives without killing the planet. Nowhere is this more evident than when it comes to the goods we consume. Marketing campaigns are now built around products that promise us a better life, but are they truly good for the environment? Are they reusable or biodegradable? Are the companies paying fair wages? Are their manufacturing processes depleting natural resources?

Every decision we make before buying a company’s good or service can invoke an implicit feeling of guilt. This is something we are seeing play out when it comes to consumption of mezcal. Is my favorite mezcal made in a sustainable system? Are we potentially causing the extinction of certain varieties of mezcal through over harvesting? Are we disrupting deeply traditional production processes with our demand? These concerns are front of mind not only for avid mezcal lovers but also for agave growers, mezcal producers, and distributors. In order to better understand these questions and concerns, I attended the 3rd Encounter of Maestros Mezcaleros celebrated at Huerto Verde, an outdoor community center with an extensive schedule of socio-environmental activities located in the heart of Colonia Roma in CDMX.

The event was sponsored by Maestros del Mezcal, an organization that represents traditional producers of mezcal all over Mexico. The two-day event featured some of the best small producers, most of whom have not been able to certify their mezcales. Since 2016, the Encuentro/Seminar has worked as a platform to showcase the work of maestros mezcaleros from different states of the country, several of which are outside the DO. For this year’s event they successfully brought in more than 80 maestros representing 15 states of different distillates of agave.

The main activities of Maestros del Mezcal are the promotion and protection of the culture and history of mezcal as well as the preservation of biodiversity. According to Abel Alcántara, President of Unión de Maestros Mezcaleros, a new certification or regulation process for the mezcal industry is needed, one that is more inclusive and one where all the small producers like the maestros mezcaleros attending the Encuentro are recognized and protected. For this reason, the organization is one the main promoters of a new bill making its way through the Mexican Senate. La Ley de Desarrollo Sustentable also known as Ley de Mezcales Tradicionales seeks to change the rules of the game and if it is approved, would reshape the way in which the industry has been working.

The primary changes called for include:

These changes would also change control over how the word mezcal is applied, and would look at the larger question of historic patrimony of Mexico, and how it provides a sense of identity and belonging for traditional producers.

Additionally, the proposed law responds to an urgent need to stop wild agaves from extinction and prevent an ecocide from happening. Alcántara mentioned that “current and past regulations have always benefited the 95% of the industry in the hands of concentrated big players, while leaving out the 5% of mezcal production from small producers and farmers.” In that sense, the new law would create a more inclusive legal framework to protect traditional practices of mezcal making but also, enforce the preservation of biodiversity.

When asked about an approximate figure of volume produced by the maestros mezcaleros he represents, he recognized that it is hard to collect data because the 5% is in hands of family makers who own very small production facilities or others called “medieros” who use other peoples palenques to finish their products. Realistically the maestros project can only represent a tiny volume of mezcal but that doesn’t necessarily diminish the importance of its message. These are topics that have long been discussed and very few small producers have been happy with the current system.

Cooperatives as extensions of community

Mexican agriculture remains deeply ingrained in indigenous cultures. A strong estimate is that 40% of the agricultural labor pool is composed of indigenous peoples. In recent years many scholars and institutions have discussed the role of traditional knowledge in reducing the effect of climate change. Indigenous communities have tended to think first about the wellbeing of its community, and what to do in order to preserve that balance in which the needs of every member are met. After speaking with different maestros mezcaleros at the event, it seems like community organization through the work of cooperatives exemplifies the proposed law’s goal, but on a greater scale.

For example, Sanzekan, a cooperative from Guerrero incorporates 43 maestros mezcaleros who work together to produce around 165,000 liters of mezcal per year. In 2007, the group came up with an internal set of guidelines related to production, preservation of natural resources, price regulation, and commercialization. According to Faustino Castro, one of its producer/members, if a maestro needs 3,000 agaves to make mezcal then he/she would need to cultivate at least three times that amount to make sure the future generations will have agave to keep producing mezcal. In order to reinforce their reforestation program, they work with local forestry organizations to encourage every to maestro plant more oak and palm trees. An important rule is maintaining their artisanal production process which means a maestro cannot produce at full capacity: For example if his resources are enough to make 10,000 liters of mezcal, then he can only make half that amount. And, if anyone approaches a producer to buy the whole production, he can’t sell it because he would be depleting the resources of his entire community. Sanzekan is only currently available in Mexico but has already been approached by companies from Asia and Europe interested in buying– they are considering the proposal to make sure it is within the limits of their production.

There are other smaller cooperatives like Maestros Chontales Tres Colibris (Three Hummingbirds) from Sola de Vega in Oaxaca. This is a group of eight families with a long tradition of mezcal making, however they decided not to get certified in order to maintain the mezcal making tradition they inherited from previous generations. They produce around 1,800 liters per year and their three expressions (coyote, barril, and a pechuga made with chepiche and coyote in clay pot) will be soon available in more locations in the US under the brand called Fanekantsini (currently it is only in Colorado.) I asked if they had to change the way they produce the mezcal and they said no but this new phase of production meant each family had to produce one extra lot. Samuel Velasco, a member of this cooperative said “they do not adapt to the market needs, but rather feel it is the market that needs to adapt to the needs of the agave.”

He also spoke of their continuing efforts to preserve the biodiversity of their ecosystem by respecting the seasons for each type of maguey such as the chato (A. salmaniana), a limited production made once a year.

I spoke with producers from the cooperative of Joven Viejo Mezcal located in the Central Valley of Oaxaca. They are part of the official DO and produce 4,000 – 5,000 liters per year, with six different expressions. They use semi-cultivated agave and the priority of their cooperative is the reforestation of agaves so they started a program spearheaded by women from the cooperative to collect seeds. Currently they have no interest in supplying international markets but they do expect that the new law would bring more economic support from the government in the form of more nurseries.

Frente Mayahuel, an advocacy group also involved in the organization of the Encuentro, focuses on the important work of political management and communication within the mezcal community in order to support projects such as the Ley de Mezcales Tradicionales. According to Berenice Acuña, its founder, one of the goals of the law would be to modify the way in which the supply chain works to eliminate its biases by investing in technical assistance for farmers and producers, by creating a strong link between government agencies and civil organizations and universities so that research can be efficiently applied to the productive cycle of mezcal. According to Acuña “small producers need to know their value and embrace it so they work in a business model where they can be able to finance their own operations and future harvests.”

Mujeres del Mezcal, another group involved with the Encuentro, is a national civil organization created to empower women, mostly the wives of maestros mezcaleros, and invite them to participate in the the promotion and selling of mezcal. They have a support network spread throughout 14 states to advise small producers in matters regarding branding, marketing and sales. The Guerrero chapter works closely with the University of Guerrero UAG in a technical program that brings support to the producers regarding agroecological practices such as  the use of biofertilizers. They also expect to get more support and funding from the federal government so they can help the producers grow more and better.

Bringing it back home

For a Mexican national and expat like myself – I’ve spent the last 10 years in Washington D.C. promoting Mexican culture and gastronomy – it is fascinating to see how the appreciation for traditions can inspire a movement inside the country and abroad. For Mexican agriculture, our origins are in la milpa, a multicrop system built around the rotation of fields that help increase the richness of the farmland and avoid soil erosion. Magueyes are part of this complete ecosystem which works to empower communities.

Like many of the people I interviewed, I do not think there is a future in this industry without the creation of a synergy between different sectors of our society, and in order to secure a better future for mezcal we need to start by acknowledging the needs of indigenous farmers as well as their customs to better produce food, water, forests, and a well-balanced ecosystem. Once these needs are recognized, then we can begin to talk about creating a system that is manageable and brings real benefit for everyone. In order to deal with our predominant fears of running out of mezcal, we need to act with the ecosystem as a priority.