Put the insect back into your cocktail 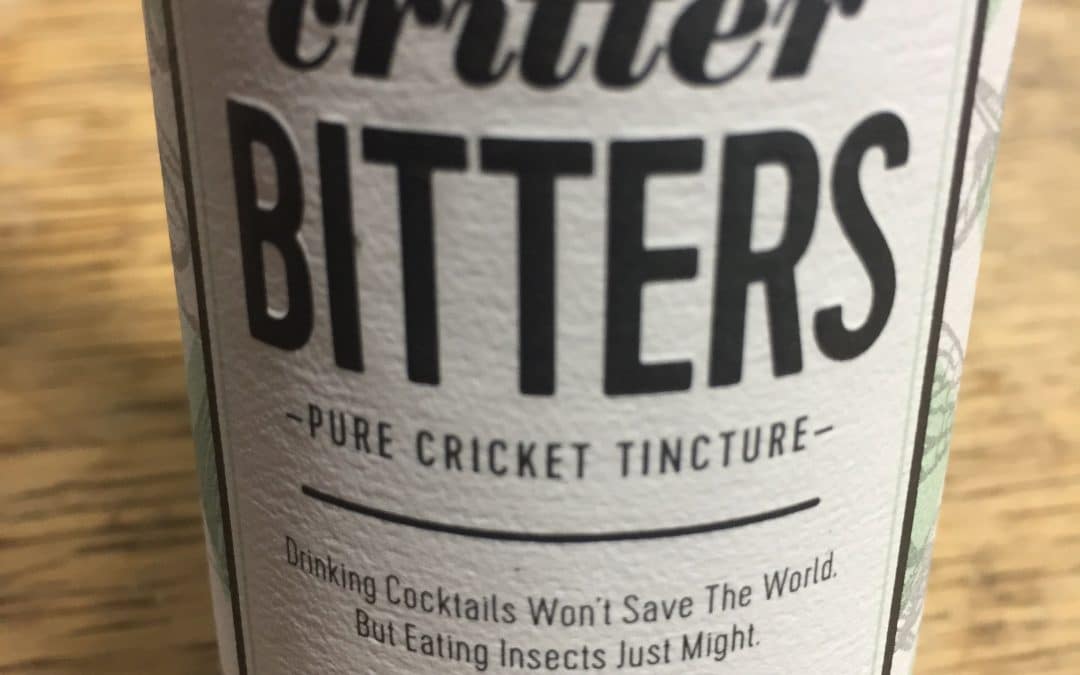 You know you’re in good company when someone says “where’s the cricket in here?” about your drink. That’s exactly what Julia Plevin, half of Critter Bitters, told me as we sat down to taste the Critter Bitters Toasted Cricket Bitters. That is the first in, up to now, a two bottle line of bitters based on one of Oaxaca’s culinary claim to fame, the toasted cricket aka chapuline. (If you want to cut to the chase, get your bottles today!)

To back up a step or three, Julia had emailed me a while back looking for ideas to fill out her Oaxaca trip and we hit it off. I couldn’t quite believe that I’d missed this whole idea of bitters made from crickets, I mean, I’ve had cocktails rimmed with sal de gusano, garnished with crickets as well as ant larvae. But those were all in Mexico and here was a woman saying that they were making bitters out of crickets, right here in San Francisco? What a discovery.

Once she got back from Oaxaca Julia very kindly set up a tasting at Seven Stills, the distillery/brew house in San Francisco’s Bayview neighborhood where they make their bitters. Just like Mikkeller and Evil Twin there are also gypsy distillers which is great news for anyone interested in expanding the spirits and bitters worlds.

But the real and obvious question here is, “Who thinks up the idea of making bitters from crickets?” Sure, it makes sense, but how do you get to that idea? As it ends up this was an inside out thought experiment. Julia was in grad school with business partner and friend Lucy Knops at the School of Visual Arts’ Products and Design program. They had a class called “Sustainability + Resilience” in the fall of 2013. The UN Food and Agriculture Organization had just released a report on edible insects and it became the basis for their project to try and make something out of insects. As they worked on the idea of how to get people over the ick factor, as Julia so delicately put it, they hit upon the big idea; add alcohol.

As abuelas selling chapulines in Oaxaca have known for a long time, insects are indeed our future. If you haven’t heard listen up, they’re the most nutritious, sustainable, and efficient source of protein out there. In a world facing systematic environmental collapse, insects are our salvation. More of the great bottle design.

The funny thing is that, while talking to Julia, I was thinking back to the Winter Fancy Food Show and the absence of insects there. I see them in power bars and shakes already, it’s just a matter of time or, perhaps, they’re already in the ingredients list and we just don’t know it because, as that UN study shows, 2 billion people already include insects in their diet. Hell, Gimlet’s Startup podcast even did a full episode on the topic.

That’s why Julia and Lucy couldn’t let go of this insect fixation, there had to be something deeply sustainable there despite their professor’s protestations that ‘ok it’s time to move beyond this cricket fixation.’ So they do a reality check with Amy Stewart, famed author of The Drunken Botanist, who said “just try it.” That response gave them all the motivation and permission they needed to make a real run at the project. That led to their 2015 Kickstarter campaign which kicked the entire project into action. The fact that Seven Stills welcomes gypsy distillers means that you get a community formed around spirits. Or, as Julia puts it, friends with bugs. Theirs are literal, everyone else’s are psychological.

And that’s where I’ll pick up the story with the answer to “where’s the cricket in here?” or “how do they taste?” Given that Critter Bitters are exactly that, bitters made with crickets, you’d expect a distinctive insectness in the bitters and to show through your cocktails because insects occupy such a pivotal space in our mental universe. They’re supposed to be different, unique, and make us feel that way. But as I tasted their Toasted Cricket Bitters I was hard pressed to label any flavor as coming from an insect. That’s why I asked the initial question, instead this bottle is floral, it adds an air of mystery to cocktails and mixes especially well with mezcal that isn’t overly smoky and whiskeys that aren’t overly viscous or woody. The bitters are just a bit too delicate to stand up to overly flavored spirits. But their next product more than stands up broad spirits and puts the cricket back into the equation. The Pure Cricket Tincture is just grain alcohol and crickets so it was designed to really bring that flavor forward and do so successfully. To pre-empt any of thought of a gross out flavor this is another moment where you realize just how deeply seated our cultural bias is against using insects as food. Tasting this tincture I wouldn’t immediately think of insects, instead I’d think of a really distinctive bittering agent, a non-herbal alpine bitter, but I’d never be able to trace the flavor back to an insect. It’s simply a great flavor that works well with strong spirits and a clear sign of just how far we have to go to integrate insects into our diets. . Speaking of the insects, they come from across the bay in San Leandro where Tiny Farms is working away on an insect fueled future.

It’s funny talking to Julia because you get the sense that she’s not going to let go even if the future isn’t exactly crystalline. She and Lucy have two great products with beautiful labels, so where’s the audience? As I’ve sampled them I find that crickets do quite well in Manhattans, thank you very much, or even add a bit of color to the otherwise quite flavorless and sensation full Sodastream. This is exactly the sort of thing you’d want to see on bars and now that I’ve tasted them, I’m realizing that Critter Bitters are in bars and retail shops wherever I look. They’re just waiting for you and me to pick them up. Get your bottles today at their web store.