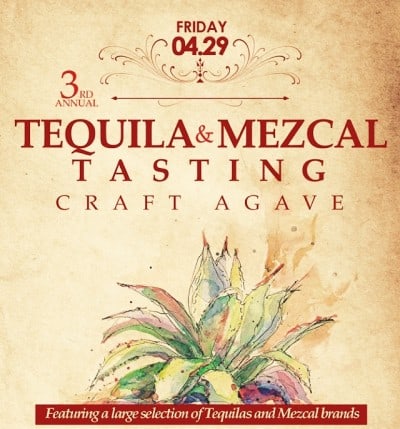 It’s not often, if at all, we venture into Tequila world, but when this opportunity came up to collaborate on an agave event at the Clift Hotel, we jumped. With the NOM 199 proposal hanging over the agave industry’s head, we figured it was time to put craft with craft and celebrate all that is good about small production agave distillates.

On April 29th, from 5-8pm, we give you Craft Agave at the Clift Hotel. Six mezcals, six tequilas, and a whole lot of expressions.

On the mezcal front we’ll have mezcals from Oaxaca (Benesin, Amarás, Quiquiriqui, Don Amado, Ilegal), Guanajuato (Mezcal Marqués),  and Guerrero (Amarás). And on the tequila side we’ve got Fortaleza, Casa Noble, ArteNom, Tequila Ocho, Chinaco, Don Pilar and a few more surprises. The highly curated list is a great way to sample side by side the complex flavors of distilled agave.

Tickets are available here — $40 in advance, $50 at the door. A portion of the proceeds will be donated to the Tequila Interchange Project that has been so instrumental in educating the market about agave distillates, and leading the fight against NOM 199. Final comments are due April 29th, so please be sure to sign the petition!